Art for the Nursery

A main goal in the nursery has been to keep things thrifty -- especially given that we are now a single income household (THANK YOU sweet husband for making this possible). I feel like artwork is always a place where people can easily save money by getting creative with things they have on hand.

Several years ago, I found these gorgeous flashcards at the ol' Tarjay (yes, I was immediately drawn to them because of the ladybug on the front!). I didn't have any kids at the time, but sometimes when you see something beautiful ... just get it! And so when it came time to fill some wall space in the nursery, I immediately thought of these. 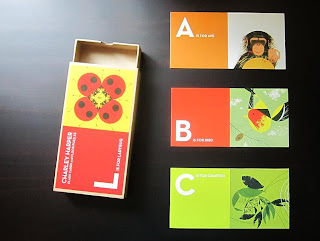 I wanted them to be spaced out to maximize the awkward wall space I was hoping to fill. Here's an idea of how I hoped it would look. I used poster putty to stick them on the wall without damaging anything. 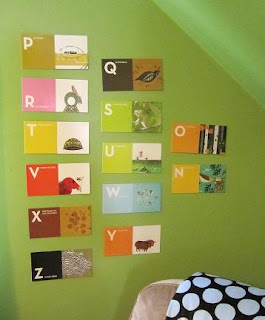 The next dilemma was figuring out how to hang them on the wall. I wasn't too keen on the idea of placing a billion tiny holes all over the wall. I also felt that the poster putty would not hold them exactly in place. I was hoping for more movement and a way that I could easily pull them down to use when little man gets old enough to start reading. The hubs is actually the one who came up with the idea for using grommets to hang them in some way. The idea stuck, I grabbed the needed supplies, and I was off to make it happen. 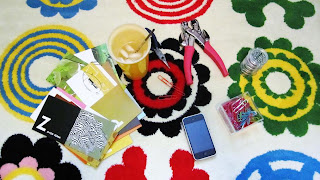 The hardest part of this process was the very first hole punch. I didn't want to damage the cards in any way, much less punch FOUR holes in it. Finally, after carefully measuring where I wanted to place the grommet, I worked up enough courage to make the first hole ... and then it was easy as pie to punch 103 more. 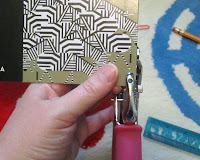 The next step was to carefully press the grommet into place. I was careful to use even pressure to make the best compression possible, as there are images on both sides of the cards and I wanted to be able to display either side.

I used the original card as a template for all the other cards to ensure that they would match up as close as possible. Here are a few cards all grommetted up and ready to go! I feel like the grommets make things look so classy ... like a great handbag or hair accessory.

The next step was to figure out a way to connect the cards together. Remember, I'm trying to stay thrifty and also trying to not make a million holes in the wall. My first thought was to buy small "S" hooks, but there had to be a more thrifty way. That's when I thought of making "S" hooks out of colored paperclips that I already had on hand. I must admit that it was slightly time consuming to make all of these hooks, but as my dear husband stated ... I've got the time. I used needle-nose pliers to fashion the hooks from the paper clips. Overall, I was very happy with how they turned out. 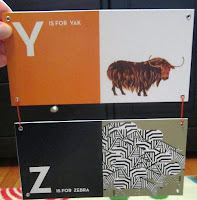 Here are a few shots of the final product. I really like the way it turned out. I love the movement, I love the how they hang, I love that I can easily remove/move them as needed. 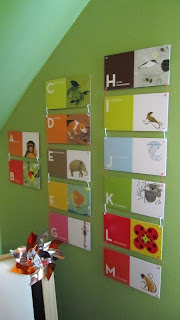 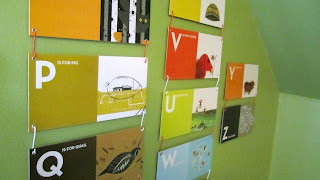 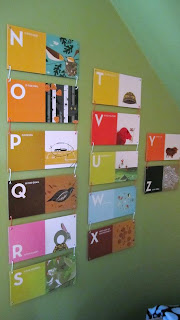 Oh - sorry that I am not showing a full shot of cards hanging on either side of the window, but I don't want to spoil any nursery surprises. I *promise* I will provide a nursery tour once everything is complete!